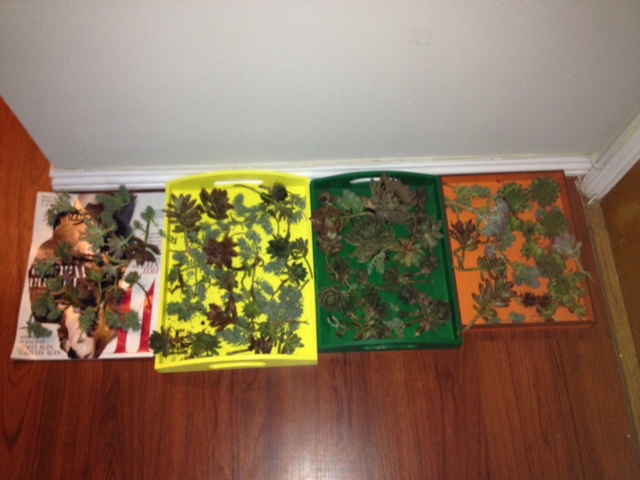 Okay, so I didn’t quite finish over the weekend (it was super busy and this little thing called “school” keeps getting in the way…) but I finally finished my wreath project last night.

After trimming up a bunch of succulents, I had to leave them for a few days to callus.

I got so busy and had to wait a couple more days than I would have liked, but they didn’t look too bad once I started assembling the wreath.

I made a huge mess putting the moss on the form. You’re supposed to soak the moss, squeeze it out, then tie it to the form. I used this wire tie stuff they recommended at the hardware store. Oh, and online it says to wear gloves when working with moss, FYI. Apparently you can get a fungus that gives you lesions. Yuck. Anyway, I decided to opt in on the glove wearing.

So, finally, here is the finished product:

It looks a little wild, but that’s okay with me– I’m a little bit messy myself. Here’s the thing– you are supposed to let it lay flat for a while so that the succulents can take root. You mean you can’t hang it right away!?! That’s right, you’ve gotta let it sit. I think I may put a bunch of candles in the middle and use it as a pretty table topper til it is ready to hang.

All in all, I am pretty pleased with the results. I would post a link to a tutorial, but I kind of combined a bunch of methods because it seemed like pretty much every tutorial wasn’t detailed enough and I had to do a lot of outside searching about different aspects of the project (how to trim succulents, for example).

So, now to answer all the questions that you rehabbers have in mind:

How much did it cost? It ended up being $45 for all of the succulents, and I could have made two small wreaths or one large. I opted for a large. The wreath form was $3, the floral pins were $2. The moss and the tie stuff cost $17. (I had gloves and trash bags :-)) I had to go to three different places (and to the Valley, which if you’re from LA, you know that’s a major pain) to get all of the materials. And it was a whole lot of work. So, in total, I paid $67 for the wreath (not including labor).

Would I do it again? It was a fun project, I like that I got to pick my own plants and lay out all of the colors. I don’t like that I have to wait to hang it. I really didn’t like cutting up the succulents– you had to get your hands in the dirt, and the first time I touched a snail, I almost freaked. There were spiders, rollie pollies, and worms in my plants. They were grown outside- that is normal, I get it. Bugs aren’t my thing.

There’s nothing like the satisfaction of being creative and making something from nothing, but for $35 more, I could have a ready to hang wreath with no work. I love what I have now, and I’m glad I did it, but I probably wouldn’t take on this project again. I was toying with the idea of making friends wreaths as a surprise for the holidays, but that idea has been thrown out the window. If you want to take it on, I suggest ordering a pre-made wreath online. You can get it for as cheap as the form, moss, and ties combined (if not cheaper) and it will save you a lot of time and mess.